When the Supreme Personality of Godhead Lord Sri Krishna descends to earth for performing His transcendental pastimes, He brings with Him His own eternal abode known as Goloka Vrindavan, along with His most intimate associates, friends, servants, and various other transcendental paraphernalia. The Lord's trancendental abode which is also known as the dhama, is non-different from the Lord's eternal abode in the spiritual world, in fact it is an exact replica. By mundane material vision the dhama may appear like any other place on earth, but to the pure devotees and perfect yogis, the dhama is a completely spiritual abode saturated with its own transcendentally surcharged atmosphere. Vrindavan-dhama is a place of ever-increasing joy. Flowers and fruits of all seasons grow there, and that transcendental land is full of the sweet sound of various birds. All directions resound with the humming of bumblebees, and it is served with cool breezes and the waters of the Jamuna. Vrindavan is decorated with wish-fulfilling trees wound with creepers and beautiful flowers. Its divine beauty is ornamented with the pollen of red, blue and white lotuses. The ground is made of jewels whose dazzling glory is equal to a myriad of suns rising in the sky at one time. On that ground is a garden of desire trees, which always shower divine love. In that garden is a jewelled temple whose pinnacle is made of rubies. It is decorated with various jewels, so it remains brilliantly effulgent through all seasons of the year. The temple is beautified with bright-coloured canopies, glittering with various gems, and endowed with ruby-decorated coverings and jewelled gateways and arches. Its splendour is equal to millions of suns, and it is eternally free from the six waves of material miseries. In that temple there is a great golden throne inlaid with many jewels. In this way one should meditate on the divine realm of the Supreme Lord, Sri Vrindavan-dhama." (Gautamiya Tantra 4) 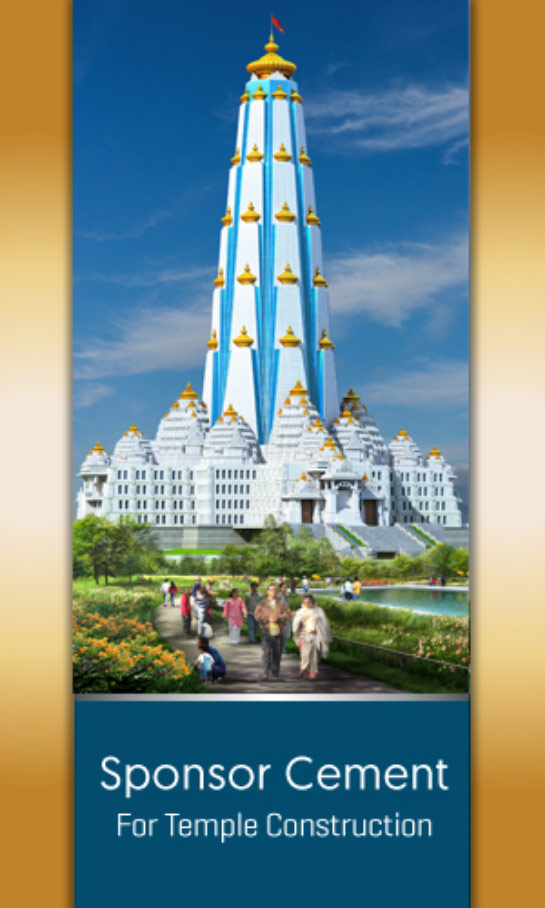